When it comes to designing a production, and especially in hotels, one question comes up often – “to hang it, or not to hang it?” 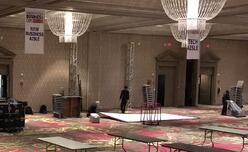 You may hear this referred to as “flying” or “rigging”, vs. “ground-supporting” or “ground-stacking.” The main benefits to hanging anything are: it can free up a lot of space, it can solve technological challenges, and it just looks better. To attendees, it’s an immediately noticeable indicator of production value – that there’s a level of permanence to what you’ve set up for them can make an impact on how seriously they view the content, and your group.

But there are times when the decision isn’t clear. So, what do you do?

Just consider this: aside from costing more, hanging equipment starts first with needing more time. Think of the setup day as a full setup day. Setting up a show with significant rigging takes a lot of coordination between multiple ends of the AV production spectrum alone, and even coordination with banquets or event staff. After the hours spent just attaching the gear to the appropriate lifting apparatus (chains, motors…etc.), we will likely also need to service the equipment once it’s up there to get everything focused properly. That means a lift beeping and buzzing its way around the event space for more hours still. No tables can be set underneath, and other ends of our team and the hotel staff may be unable to continue working until it’s done. So you end up with some waiting around, and that’s just the nature of it. It has to be right – safety is of paramount concern, so the time is necessary. 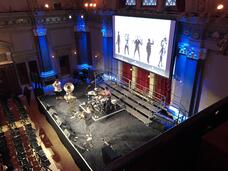 On top of that, there’s often another group involved – whether it’s the in-house AV department or an outside rigging company, you may run into a contractual obligation to have another group actually handle the physical hanging of the equipment. That often means a whole separate crew showing up for just that, and cost efficiency goes down.

Oh, and that’s all for the setup and for the strike.

Out in Chicago for an event a couple of months ago – we were halfway done with a strike just waiting for the in-house AV team to lower our gear from the ceiling so we could get out of there. Power was on, everything looks fine, and yet after an 18 hour day, our only hopes of having a dinner that night were stuck hanging hopelessly 16’ overhead. It turned out, when banquets had moved the air wall out after the program ended, one of the two legs of the power distro had gotten kicked out, leaving us with just enough juice to make everything appear to be powered on, but not enough to actually lower anything. It was an unusual situation, but we ended up being okay since we had the time. It’s another layer of complexity and more variables to itself, just like anything else. The effect is unmistakable, and sometimes it’s totally necessary – just make sure you have the time first. 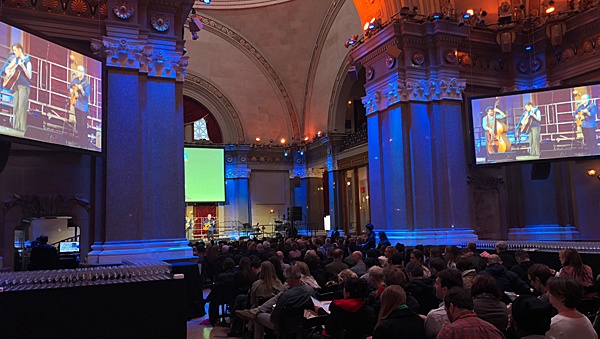