No matter how glitzy (or not) the general session may be, it will take its due share of the planning attention as the pinnacle of conference programming. However, often the unsung hero of delivering content & messaging is the breakout session. With schedules packed between coffee breaks and afternoon rotations, and bookended by even more general sessions, the level of interaction gets higher along with the level of coordination.

The AV design will usually favor function over form in an effort to keep the overall plan on track. Simultaneous breakout rooms, changes to audience and/or room sizes (hotel airwalls coming in and out), and potentially differing formats like boardrooms and workshops all play a role. Regardless, your breakout rooms will require a different approach; so, knowing where to allocate AV budget and how to prepare can be the difference between smooth sailing and… well, chaos.

While things like webcasting, and  backdrops    may be a factor for breakout rooms too, they are usually scaled down from the production level of the general session. The lower level of formality yields more Q&A, dynamic discussions, and rapid content changes. Again, as opposed to challenging system designs or hitting cues, success is predicated on things beginning and ending on time. 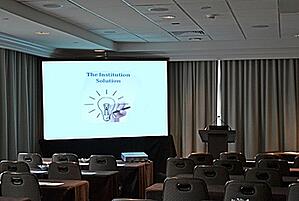 So, the first thing to consider is a clear schedule, and runs of show for each room. Having clear documents for your AV partner to digest is critical, and should include session names, presenter names, room assignments, and the literal file names of any content we’ll be showing. Of course, this will be an organically developing document leading up to the event, but it’s the only way to ensure everyone will be on the same page. Even down to the banquet’s changes – especially when rooms are resetting or airwalls are moving – our technical layouts will need to be tailored to the physical space, and something as simple as going from theater to banquet seating could leave us with a logistical issue and neither the time, nor the staffing to solve it.

That leads us to the next key detail: how many people will we have for the breakouts? While the show operators from the general session are often skilled in multiple disciplines of AV (sound, video, lighting), you may still need additional staff just for running breakout rooms. The content will usually dictate whether or not rooms can go unstaffed – if the rooms only have one visual presentation/PPT/Keynote to show, then you won’t need someone to switch any content. You could also run the visuals from a laptop at the podium or wherever the presenter will be on stage, allowing them to make any of those changes themselves on the fly. As long as the presenter is comfortable with the idea that whatever happens on the laptop will show on the screen(s), then you’ll be fine without assistance. Also, microphones will play a role, in that any wireless mics should really have a skilled audio engineer in the room. Often, frequency issues from wireless mics are addressed before anyone even knows there’s an issue – that’s just the nature of using wireless. If all you have are podium mics, or some wired table mics, you’ll be okay provided the room has been set properly. Finally, a speaker timer   is an extremely useful tool to help sessions begin and end on time, and that too requires someone to operate.

Naturally, the best-case scenario is to have at least one operator in each room that can both run the AV systems, and manage the transitions. Budget may require finding a more cost-effective route, and in these instances, you might be best served with at least one AV operator floating between all the rooms. Your rooms will still have to self-manage, but at least it leaves someone available to resolve any issues or make changes quickly.

On the flipside of that, if your breakout sessions need to jam a heavy amount of content, complete with room resets, you may also consider a Breakout Manager. Since this end of conferences can be as choreographed as the general session, you’ll be well-served to have someone specifically focused on that. This person could oversee the various changes, incoming content, and serve as extension of your staff help keep everything on track. In particular, any event where recordings are being taken of each breakout session, someone will need to manage the collection of all the footage.

In any case, and especially if you don’t have a Breakout Manager, it’s also critical to have content received in advance. There are always those last-second additions, but you should stress to your presenters the need to have that content prepared. Nothing derails a block of scheduling like late or manipulated content. From missing fonts to formatting issues, to just the time it takes to load on potentially multiple computers – it’s an easy thing to avoid with firm deadlines. In many cases, groups will bring their own laptops for us to connect with the content preloaded. While this is a viable option, note that there are things that need to be done with any new laptop to prepare it for a show. Things like silencing notifications and updates, battery settings…etc. On top of that, we’d also need to have a proper power supply, and the video connections must be confirmed in advance.

Lastly, and most often when working in hotels, it may be advantageous to utilize the in-house AV departments. It’s common for spaces with internal departments to charge a fee for bringing in outside production. When the production level of your breakout sessions is low, it actually may make sense to offer the breakout rooms up to them and let your AV partner handle the general session. 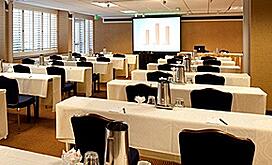 Especially in cases where there are many rooms with simple equipment setups (flip charts, screen/projector…etc.), the in-house AV vendor will be well equipped to handle these needs, and you may even negotiate with the venue to remove the “outside production” fee. Since these venues will often be collecting a percentage of the AV bill from the in-house, it allows them to collect it providing a service they can do well and saves you an added expense. However, if the production level increases, then the in-house AV might not be a fit. Technically they are not as strong as an outside provider, and it also might not make sense to divide up your event planning communications to two separate groups that may need to act as one.